The Queen Leaves Balmoral for the Last Time 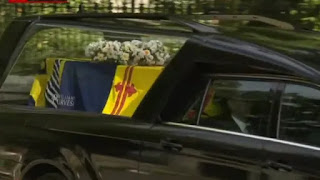 I believe one is never prepared to view the coffin of a loved one. All those around the world who loved Queen Elizabeth II surely shed at tear at the first sight of the hearse carrying her coffin as it left Balmoral yesterday.
The cortège headed to Edinburgh to carry the Queen to the Palace of Holyroodhouse. 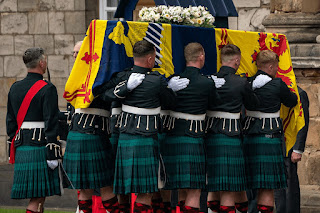 The coffin was met by the Duke of York,The Earl and Countess of Wessex, The Princess Royal, and Vice Admiral Sir Tim Laurence. The coffin rested in the Throne Room until this afternoon when it was conveyed to St. Giles’ Cathedral, Edinburgh. 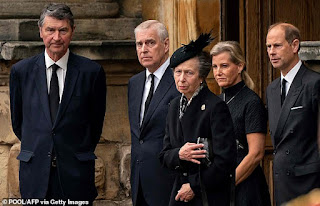 King Charles, Anne, Andrew, and Edward stood guard over the Queen’s coffin in a moving 15-minute vigil. The Queen will lie in state until tomorrow evening, when her coffin will be flown back to London. 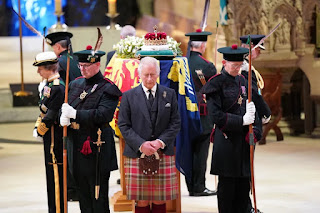 I have been sipping the Queen’s favorite tea, Earl Grey, and browsing through the latest issue of Victoria Magazine—the British issue. As it turns out, this issue features a romantic tour of Scotland, with stunning photos and interesting stories of Balmoral and Holyroodhouse. It’s a must read! 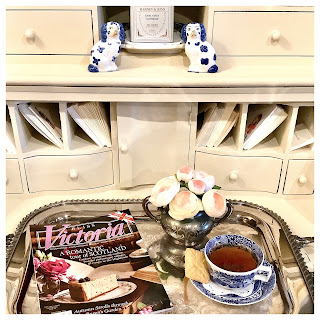 Teatime while mourning the Queen
Posted by Miss Janice at 4:36 PM

I was so hoping that Major Johnny Thompson would be able to perform this final duty (escorting the Queen home) but it appears that he's been called into service to King Charles.