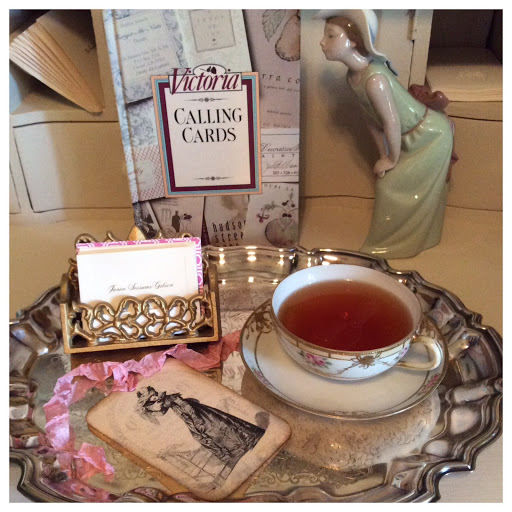 Do you have your own social calling cards? I have had calling cards in my stationery wardrobe since I was a young girl.  They are great to use at parties, class reunions, or just to give to an old friend when meeting after a long absence.  The card is a great way to connect socially--"Call me, here’s my number."
If you want to learn more about calling cards, try to find this sweet book "Calling Cards," from Victoria Magazine that I have had in my library for many years. All the publications from Victoria are exquisite and this book is no exception.  It’s full of photos of lovely cards and fascinating facts on the history of calling cards as graceful social accessories.
My cards are engraved in brown on ecru paper.  I have used the same cards from William Arthur for many years--they have my full name and my telephone number in the bottom right-hand corner.  You can find beautiful calling cards online at Crane Stationery.

I will share the rest of my stationery wardrobe in my next blogpost.  Thank you for visiting with me today.
Posted by Miss Janice at 2:00 AM 3 comments: 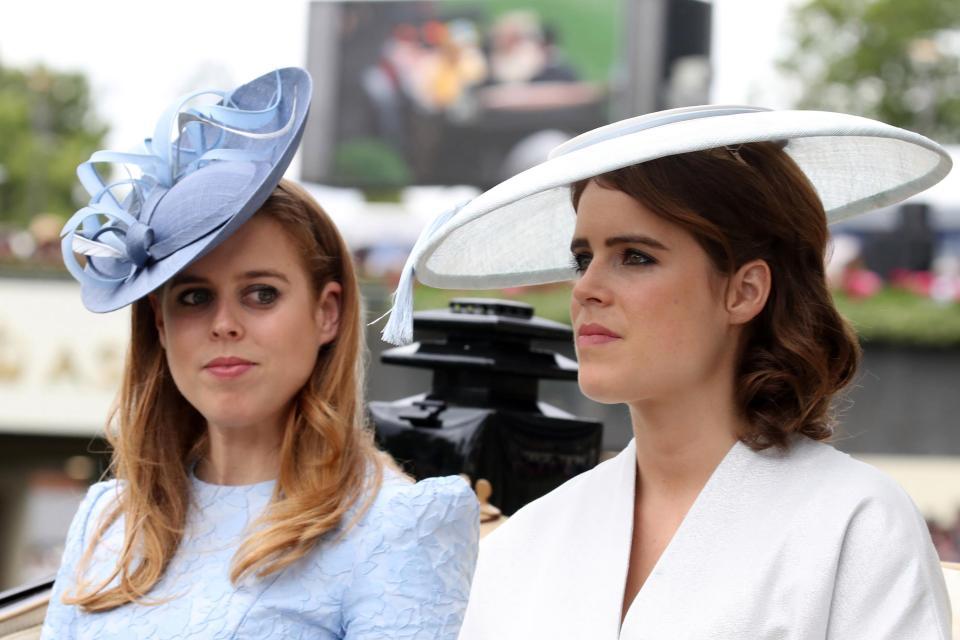 I love to collect tea accoutrements.  All the dainty pieces serve a purpose and also are pretty to look at during teatime. The mote spoon is an elegant accessory to use while serving tea.  The spoon end is pierced to skim stray tea leaves from the cup.  The pointed end is used to stick into the spout of the teapot to scoop out tea leaves.  With its long handle, it is also a convenient utensil to stir the loose tea after the hot water has been added.

In this photo the silver tea strainer is placed on top of the tea cup to catch the stray tea leaves while pouring the tea. 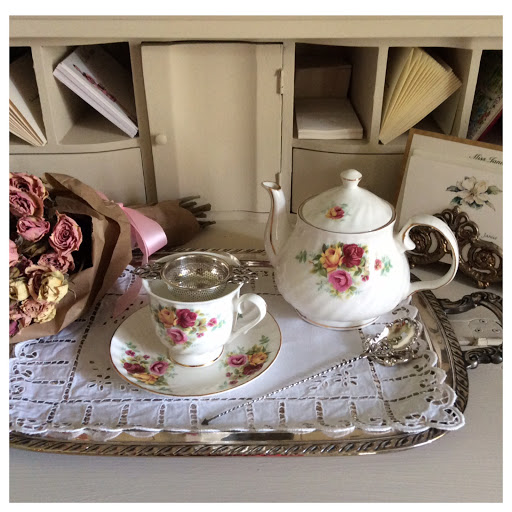 If there are any stray leaves in the teacup after straining the tea, the mote spoon can be used. The silver mote spoon is placed on a teaspoon rest after each use. 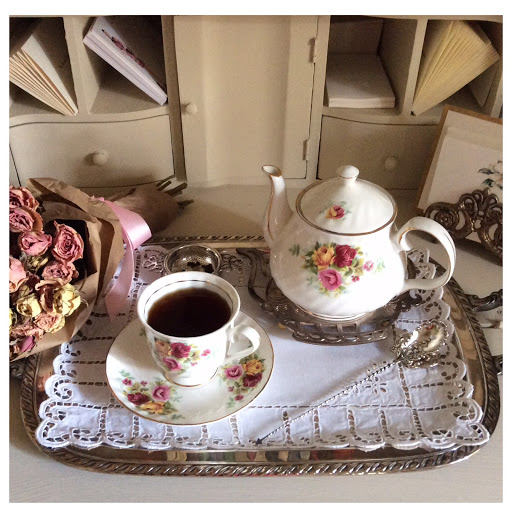 The mote spoon is from the Victorian and Edwardian era and a must-have teatime accoutrement. 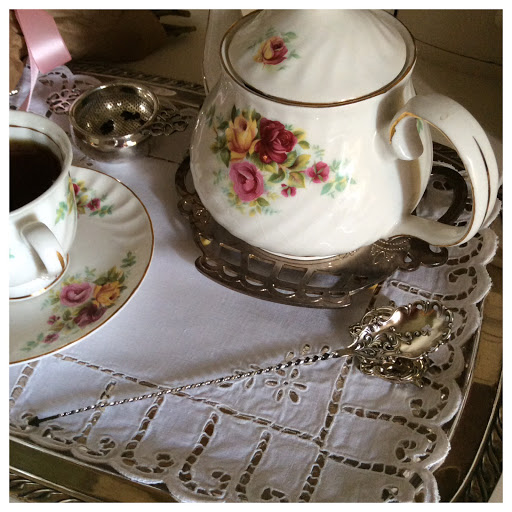 "But indeed I would rather have nothing but tea."
~Jane Austen, Mansfield Park

I love starting my morning with a good pot of tea...planning my outfit, writing my to-do list, and relaxing.  Thank you for visiting with me today.
Posted by Miss Janice at 5:00 AM 1 comment:

Lemon is a delightful addition to hot tea and of course there is etiquette to be followed at teatime.  Tea pairs exceptionally well with Anne of Green Gables and today I'm sipping a Darjeeling tea from Harney Tea.  Darjeeling is a black tea--"The Queen of Teas," a blend of First Flush and Autumnal teas from the best tea gardens.  I would only add a lemon slice to a black tea.  Be sure to pour the tea in first, then add sugar, then the lemon.  Lemon is offered thinly sliced (never in wedges!). 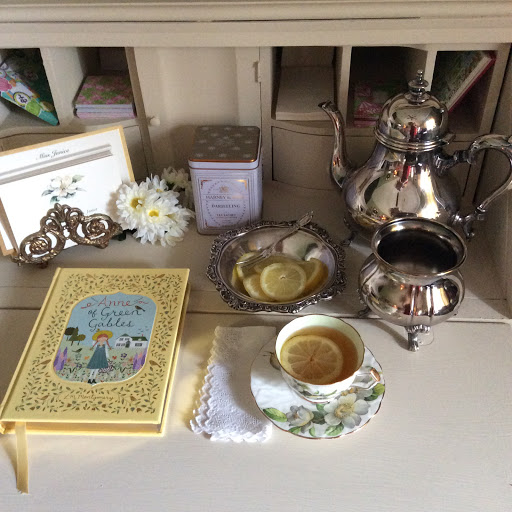 A lemon fork (with splayed tines) should be provided.  The tea pourer or the tea drinker can then put a slice directly into the poured cup of tea.  Should you desire another cup of tea, the pourer will remove the slice of lemon from your cup, place it into the tea slop bowl (shown on the right), and pour your tea.  The tea pourer or you may add a fresh lemon slice.  You may also be offered a fresh cup, depending on availability.  Remember that milk and lemon are never used together in tea.  The citric acid of the lemon causes the milk to curdle 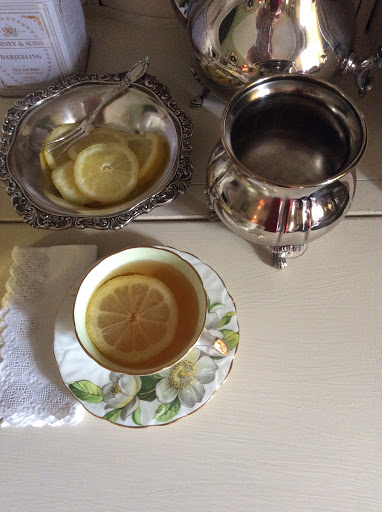 Etiquette tip--These are a few lemon faux pas you do not want to commit at teatime:

"Of course I'll stay to tea, said Anne gaily.  I was dying to be asked."
Anne of Green Gables
Posted by Miss Janice at 2:00 AM 1 comment: