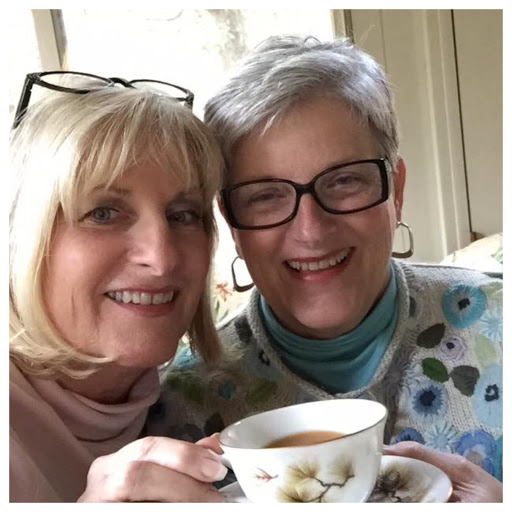 Does anyone recognize these two ladies?  Well, the lady on the left is Terri Eager and her sister Kay Snipes is on the right.  They owned the South's most fabulous tearooms--my favorite one being Magnolia and Ivy Tearoom, in Destin, Florida...back in the 90's.  Both ladies are fellow Tea and Etiquette and Children's Etiquette Consultants from the Protocol School of Washington.  I remember having tea at Magnolia and Ivy several times back in the day and it was THE place for Southern ladies to enjoy a proper tea!  After a hiatus from tearoom operations, they are back as the owners of Kingdom Teas.  At Kingdom Teas, they offer a luxury line of specialty loose-leaf teas, some teapots, and their cookbook.

I have the cookbook from their tearoom and love the recipes for "Southern Teatime Made Easy." 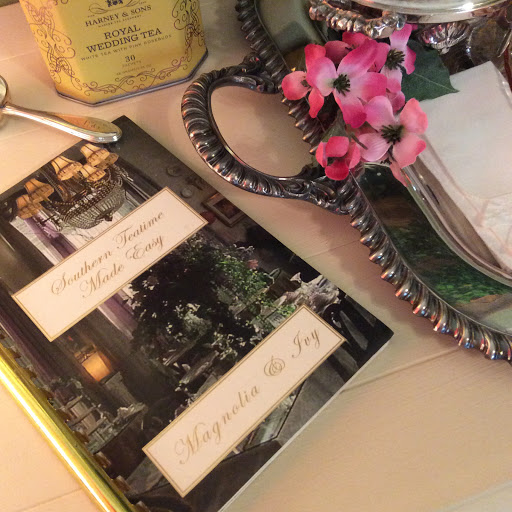 I decided to prepare their recipe for *Strawberry Butter and it was the perfect topping to my crumpets yesterday morning.  Crumpets are the perfect bread for breakfast.  They should be toasted on both sides, the smooth side first, the holey side last. 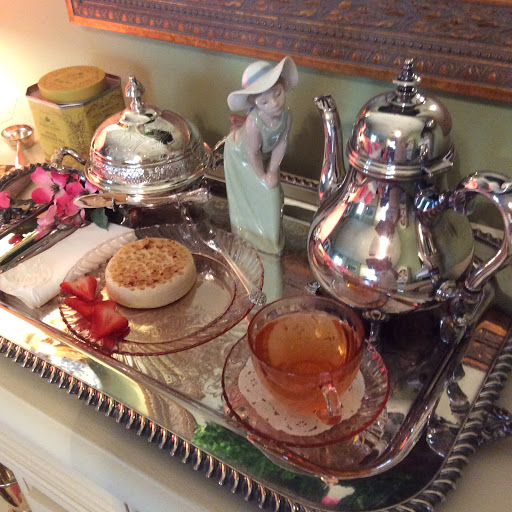 The recipe made enough to store some in the frig for later. Probably not a good idea for me! 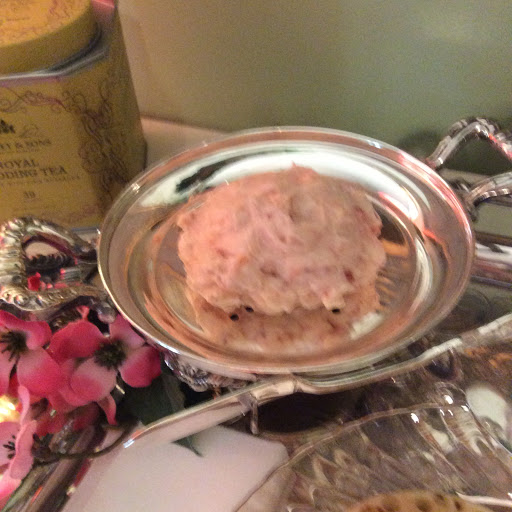 Remember to use the spreader to transfer the butter from the butter dome to your plate.  Then use the spreader at your setting to add the butter to your crumpet.  I had to control myself with just ONE crumpet!  I purchase the multi-pack crumpets and freeze them individually in zip lock bags.  After thawing out and toasting, they are still fresh! 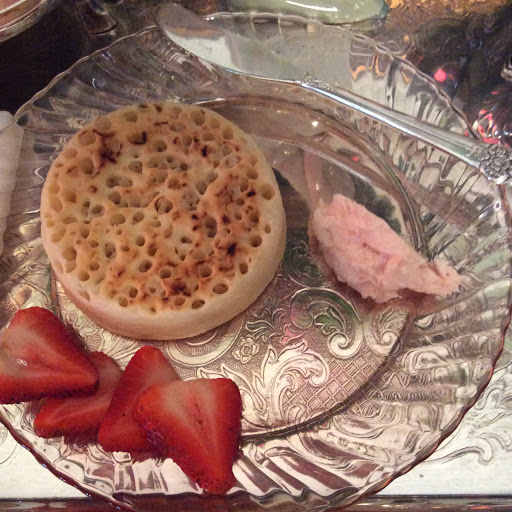 Whip butter, berries, and sugar until light and fluffy.  Store in frig until ready to serve.  (I let the butter soften a bit before serving).

Come, let us have tea and talk about happy things. 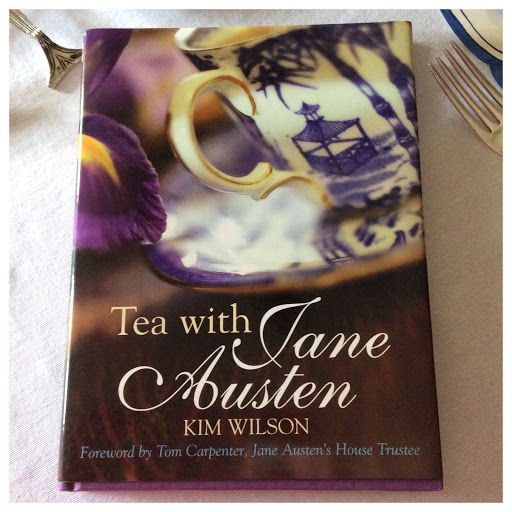 This morning we are enjoying a "Grand Breakfast with the Austens at Stoneleigh Abbey." 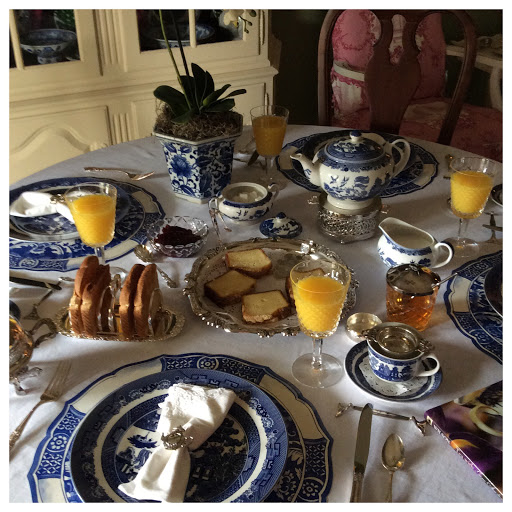 I think Jane Austen would have loved setting her table with blue and white china. 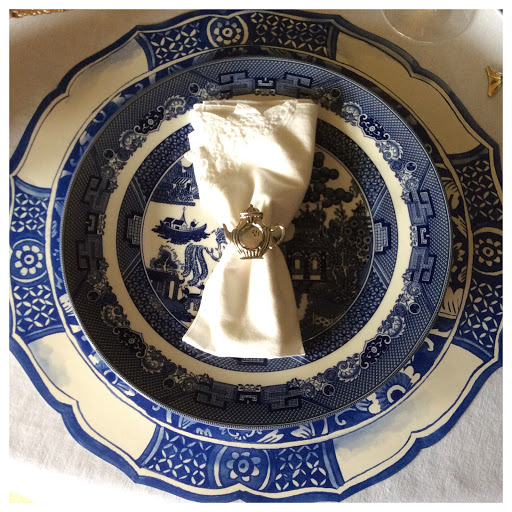 Jane loved Twinings tea and this morning we had their English Breakfast Tea...a great tea to start the day!  Twining's founder Thomas Twining opened Britain's first known tearoom in 1706 at 216 Strand, London, where it still operates today.  The business started as Tom's Coffee House, where men (not women) would gather to drink, gossip, and do business.  Thomas Twining decided to turn his love of tea into a business going against the existing coffee trend.  He came up against great opposition in the way of ridiculous taxes, thus being a beverage only the upper class could afford.  His passion and dedication would turn a little-known drink into the nations "cure all" beverage of all time.

The loose tea is steeped in the teapot and then poured through the tea strainer, which is then placed on top of the tiny silver strainer base.  Milk and sugar may be added to a black tea. 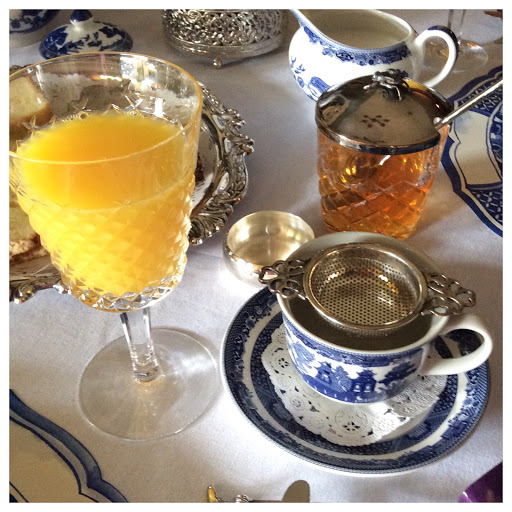 "But indeed I would rather have nothing but tea."
~Jane Austen
Posted by Miss Janice at 9:03 AM 2 comments:

The 2nd, 3rd, 4th, and 5th in line to the throne of England—all five of the Cambridges together for the first time! 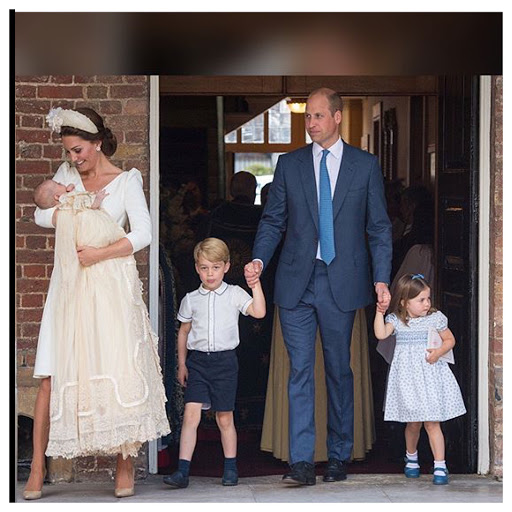 Kate greets the Archbishop of Canterbury, the Most Reverend Justin Welby, Baby Louis in her arms. 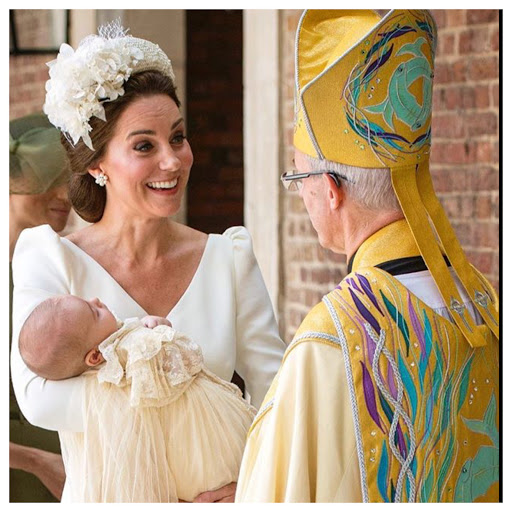 She arrived looking very princess-like, wearing a bespoke ivory dress by Alexander McQueen and a lovely headband by Jane Taylor. 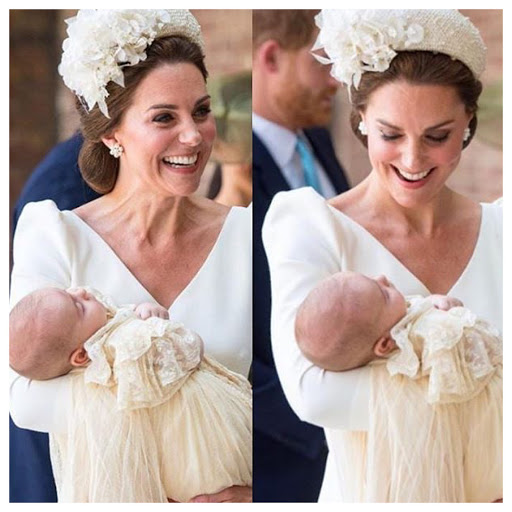 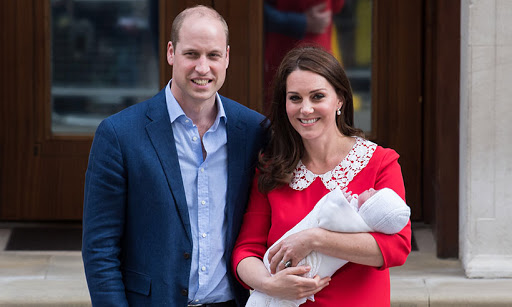 Tomorrow will be the first time we have seen His Royal Highness Prince Louis of Cambridge in public since his birth.  His christening will be held at 4pm London time at the Chapel Royal, St. James's Palace.

The service will be conducted by the Archbishop of Canterbury, the Most Reverend Justin Welby (who recently wed Prince Harry and Meghan Markle).  The Royal Family, godparents, and guests will stand near the font, and the baby will be carried into the chapel by his nanny and a lady-in-waiting.

This Chapel is steeped in royal history.  Queen Victoria was married to Prince Albert there in 1840, as were King George V and Queen Mary in 1893.  This is also the Chapel where the coffin of Diana, Princess of Wales, was taken before her funeral at Westminster Abbey. 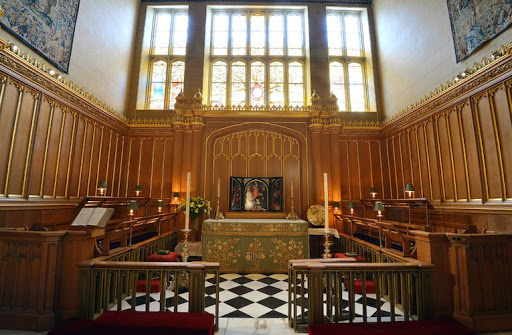 A small choir of six men and 10 boys will be seated beneath the stained-glass window as they perform a selection of spiritual songs. 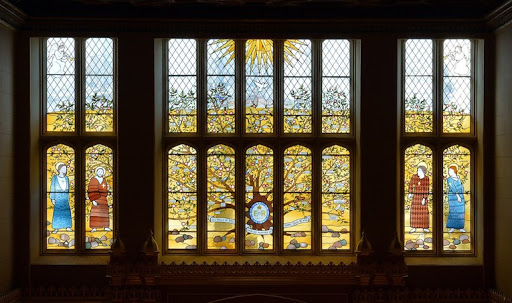 The 5th in line to the throne (behind Prince Charles, Prince William, Prince George, and Princess Charlotte) will be christened with holy water flown into the UK from the River Jordan (specially sterilized, of course).  The Lily Font bowl is a silver-gilt Font used by the Royal Family since 1840.
It will be brought in from the Tower of London, where it is kept with other royal treasures.

﻿﻿﻿﻿﻿﻿Prince Louis will wear the same gown worn by his brother Prince George and his sister Princess Charlotte.  It is an exact replica of the gown commissioned by Queen Victoria and Prince Albert when their first child, Victoria was baptized.  Sixty two royal babies were christened in that gown, including Queen Elizabeth II, Prince Charles, Prince William, and Prince Harry.

Lady Louise Windsor was the last royal to wear the gown as it was deemed to be too fragile to wear.  Queen Elizabeth II then commissioned a new gown and her royal dressmaker Angela Kelly made the gown.

So what will Kate wear?  For Prince George's christening she wore an Alexander McQueen creamy white dress with ruffle detail.

Mother and son in outfits that dreams are made of!!! 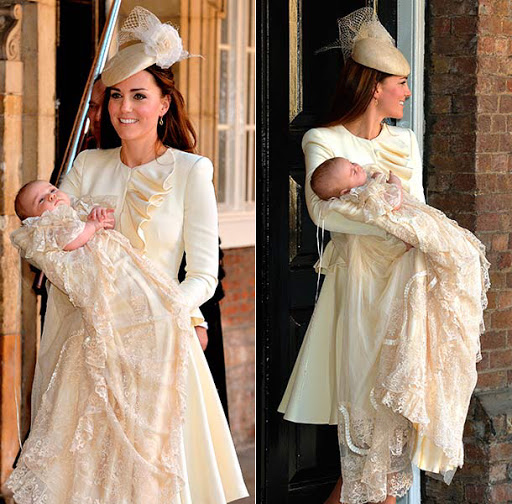 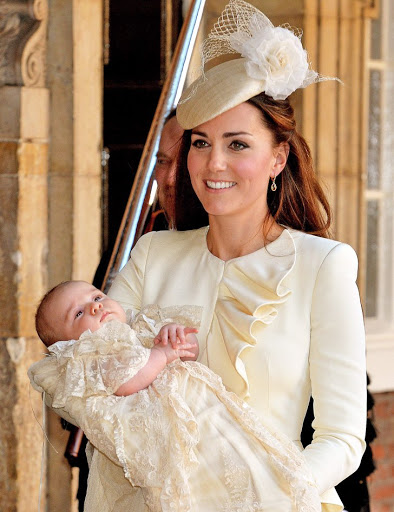 The immediate family in the official portrait for Prince George's christening, October 23, 2013. 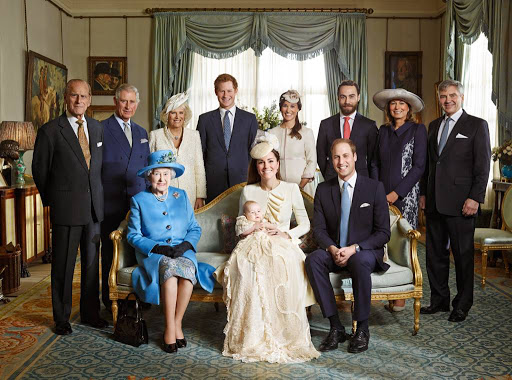 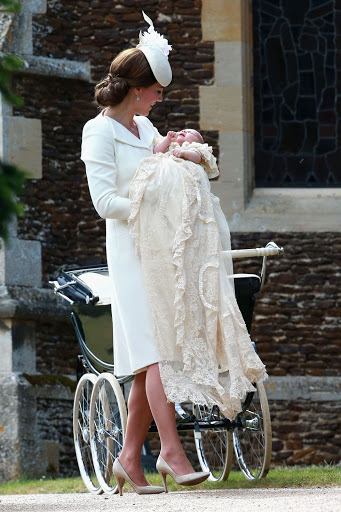 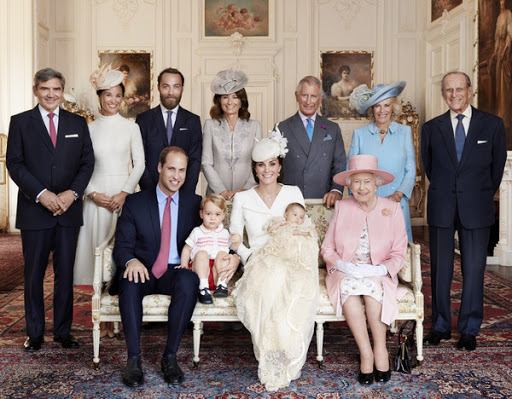 Thank you for joining me today.  Have a wonderful week.
Posted by Miss Janice at 1:00 PM 2 comments: