Tea time is anytime; however, there are certain names for special times of the day to take tea.
Breakfast Tea
Tea may be served at breakfast whether it is a hearty breakfast or breakfast in bed. I like to serve a muffin and fruit with tea on a tray to my overnight guests.
Breakfast Tea served on Blue Willow china--you can't be a tea lover and not have Blue Willow! 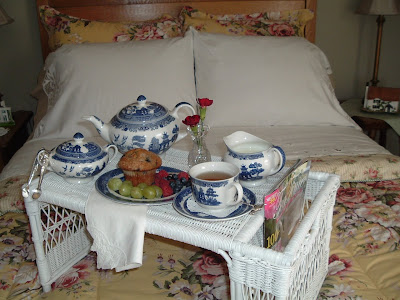 Elevenses
In Britain, workers take a tea break around 11:00 a.m. instead of a coffee break like Americans. Elevenses is my personal favorite--since I'm always working at home, I take an "Elevenses Break" for tea, crumpets, and jam. Crumpets are fat-free and delish; they are sort of like an english muffin, only softer and sweeter.

"Elevenses" at Miss Janice's Desk (yes, I use a knife and fork to cut the crumpet:-) I love this little teapot for one--I purchased it at the Magnolia & Ivy Tearoom in Destin, Florida (now closed). The tea plate and teacup & saucer is a favorite pattern of mine--Lenox Accoutrements, designed by Anna Griffin. 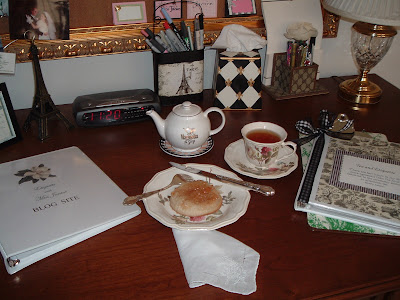 Full Afternoon Tea
Most Americans refer to afternoon tea as high tea because of its regal sound. However, high tea in Britain features heavier foods and is usually served AFTER 6:00 p.m.

The tradition of afternoon tea began in England in 1840. Anna, the 7th Duchess of Bedford, would suffer from a sinking feeling around 4 o'clock in the afternoon. Bless her heart--I get that also! She would invite friends to her castle for tea, sandwiches, and sweets. Soon afternoon tea became a widespread social practice, complete with rules of tea etiquette. Afternoon tea became known also as "low tea," because it was usually taken in a sitting room where low coffee tables are placed near chairs and sofas. Along with the tea, there are three distinct courses served at a full afternoon tea--savories, scones, and sweets.
Full Afternoon Tea with savories, scones, sweets, and tea 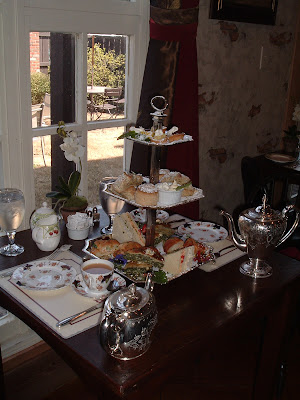 Cream Tea
A Cream Tea is taken in the afternoon and served with tea and scones with jam and clotted cream (the clotted cream is a must and the reason for the name). 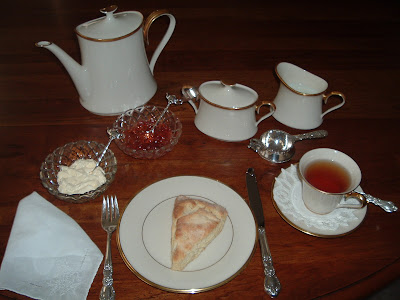 Light Tea
A Light Tea is taken in the afternoon and served with tea, scones and jam, and sweets. 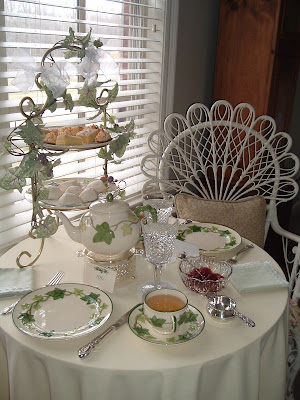 Royal Tea
A Royal Tea is also taken in the afternoon and served with tea, savories, scones, sweets, and a special dessert. Champagne or sherry is also served at a Royal tea.

A Royal Tea with savories, scones and sweets 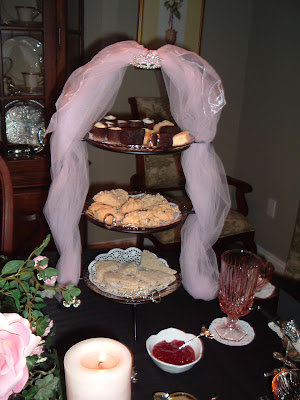 I served a champagne punch at my Royal Tea 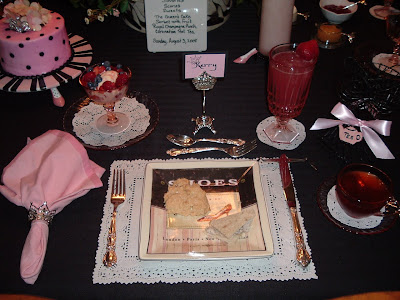 A special dessert in addition to the sweets on the tea tray was also served. 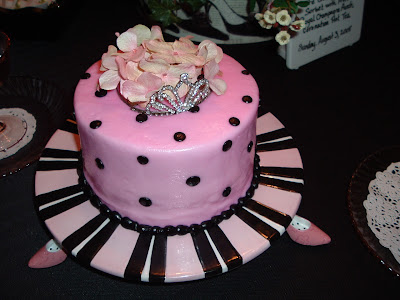 Silver Tea
A Silver Tea is a fund-raising tea usually given by a Church or charitable organization. 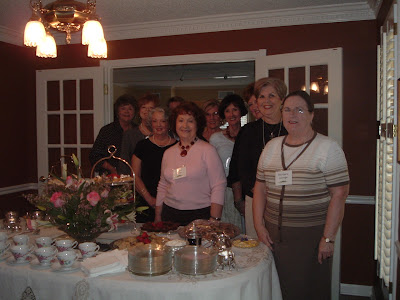 High Tea
This is a heavy meal, not a dainty affair (no tea sandwiches here), and usually held after 6:00 p.m. Tea is served along with the meal.

If you've been following my tea posts for the month, so far you have learned: The history of tea and where it is produced, the varieties of tea and stages of processing, some health benefits of tea, how to prepare your tea, and today you've learned about the names for special times of the day to take tea. I hope you are enjoying National Hot Tea Month. It's a great time of the year to sip a cuppa of your favorite tea or try a new variety of tea!

This weekend I will be featuring a review of a tearoom here in South Florida. For me, this is one of the exciting things about moving to a different state--there's a whole lot of new tearooms to visit!

Tea always makes me feel a little more civilized. No matter where I take tea, I feel a calming charm. Tea conjures up feelings of elegance and gentility.
Posted by Miss Janice at 8:20 PM

This was such an informative post. I really enjoyed it. Going to tea rooms make you feel so feminine. My daughter took me to a lovely one in Apex, N.C., for Mother's day, and we shared a high tea.
Crumpets are a favorite of mine, but not easy to find. Do you make your own, or, are you lucky enough to have a store, or online store where you find them?

Thank you so much for the tea history and etiquette posts. I truly enjoyed them!

Everything looks soooo pretty and soooo delicious!! Thanks for all of the information!!

I have thoroughly enjoyed reading the tea posts. I particularly liked #4 because it explained in detail the different times/names of taking tea (which I have always been fascinated with). Thank you!

I really enjoyed the different table presentations for all the "named" teatimes. Your bridal pattern china has a simple elegance that should never go out of style.

This is my first visit to your blog and your post is both wonderful and educational. I remember sitting with my grandmother and drinking tea and eating lady fingers. She had a collection of tea pots. Blue Willow is my favorite pattern and I collect it. Yours is lovely.

I am an avid tea drinker! I have afternoon or cream tea as often as I can...even if it's just for me : ) Lemon curd is a fav with the cream and a cuppa of Fortnum & Mason with milk. Loved these posts! Question not about tea: did you like living in Memphis?

WOW. I am loving these posts. You have truly sparked a desire to become much better versed in tea. Thank you so much.

Morning, Miss Janice. Love all your tea settings. Now how did you sneak over to my house and take my Blue Willow? Don't you just love the Blue Willow pattern? I certainly do.
Be a sweetie,
Shelia :)

I must be a tea lover (and not know it yet) because I have blue willow!

I am really enjoying your informative tea posts... I am starring them in google reader so I can go back and read them when I try to remember something you said!

the voice of melody said...

What a beautiful post and pictures! Thank you for sharing these special teas and moments. Everything looks absolutely delicious!

Afternoon tea is one of my favorites but I also like cream teas and royal teas. The last one I had was at the Biltmore House in Asheville. What a beautiful that is!

I just loved that post, I to get the 4ish sinking feeling just like Anne....I am so English at heart!
I love all the different china patterns and especially the Lenox Accourtrment by Anna Griffin. So sweet.
I am especially fond of the "cream" tea. As my husband is English we have clotted cream in the house as much as possible along with lemon curd and strawberry jam.
Loved the whole post! Kudos!
Miss Kara

I just love Blue Willow and Francescan Ivy. I have the Blue Willow but have not invested in the Ivy yet. I am loving your tea posts. I am learning more that from reading a tea book

Miss Janice, These tea lessons you have been giving us...have been wonderful! The pictures alone are worth a mint! I want you to know that I have really enjoyed them all! Thank you! Blessings, nancy

Love this article and the wonderful picture of your tea settings. I love my tea pot in one too. I was so disappointed when Magnolia Ivy closed. I always went there for tea. I love the blue willow and white tray, for breakfast tea. The Ivy china, is great. Wow the Royal tea setting was so wonderful. Thank you again for sharing your peppermint and gingerbread with me. My girls, are shopping everywhere finding me little thing to add to my collection.

I had never heard of a Silver Tea. Yet another thing that I have learned from you... : )

Oh Miss Janice - Your posts make me wish that I was your next door neighbor so we could have elevenses together. Also, I could be your guest at least once a week so you could serve me breakfast tea ;-) I do want you to know that after I read each post, I go into the kitchen and fix myself a cup of tea!! One question for you - I keep my coffee in the freezer to keep it fresher. Same with my tea?? I must admit that I have some tea that is quite OLD as my son lived in London and brought home more tea than the body could ever use :-) Oh, one more thing {and I know this is too long}. My son's 6 months in England were a sort of "gap" year between college and work. He did all kinds of jobs - one being "sanitation worker" a.k.a. garbage man. On their daily route they stopped for tea!!! Isn't that just wonderful!

Susan (Between Naps On The Porch.net) said...

Wow! So many kinds of tea...great post! I need to copy and paste this so I can remember it for all time! Now, where I get crumpets? Where do you buy yours...or do you make them from scratch? Susan

Miss Janice, Thank you, yes, Debbie and I have been talking by email for several months. I wanted so to go the tea and fashion day, but doc, has other plans for me, the first weekend, of her event. Miss Debbie says she may have to do three different days, for the event, for she has had so many wanting to come. I shall see what,is in store for me. If Doc lets me,I do plan to go to one of teas. Thank you again for making sure, that I know.

I miss my summer days where I had tea with real scones and cloated cream daily. I need to get my new Blue Canton tea set out and copy you and have afternoon tea more often!

What an informative post. I am off to search for Blue Willow China as it is absolutely stunning!